They like to reinvent their car show names here in Toronto. But Megaspeed sure reminded me of Performance World and that's a good thing.
We had two vans in there. I managed to convince Eric to put MUD BOS into the show this year.It didn't take much arm twisitng as he was pretty much into it right from the get go. Now convincing my fellow vanners to enter shows is what I do best, actually helping them get their vans ready for the show was a whole new experience for me as usually I'm dealing with getting vanners from far away into shows equally far away. So this time around I did put in a few hours getting MUD BOS spiffed up for the big show and helped get it there and back. We brought it to the show Thursday night and set it up for the show that started Friday morning. On Saturday a good bunch of vanners passed through during the day and my good buddy Steve a.k.a Ghostrider spent the day with us. It was a good weekend. MUD BOS went over very well. It was without a doubt one of the most popular vehicles in the room that we were in with about 30 other vehicles. Eric's video compilation went over very well with the crowd as there were few interactive displays in the show. All that being said MUD BOS was passed by for any awards which was disappointing but unfortunately a fact of life at these carshows for some reason. 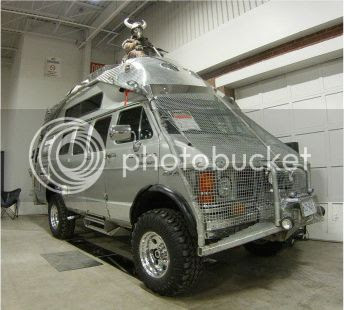 MUD BOS at Megaspeed on the Thursday night. 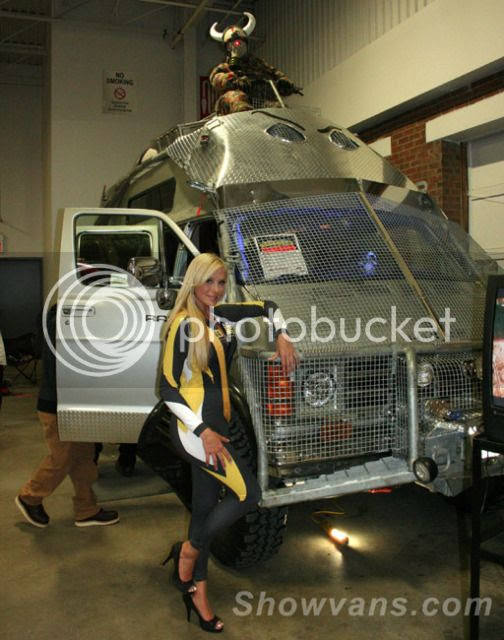 Miss Megaspeed with MUD BOS. We had  abevy of beauties posing with it all weekend long.

John Jackson was there with the Boogie Van in the feature area. He was fortunate to come up to Canada in style in the RPM rig that also carried two of their muscle cars. John presented Ken with his metal print of California Special and Alpine, it's amazing how the metal makes his photographic art pop even more. 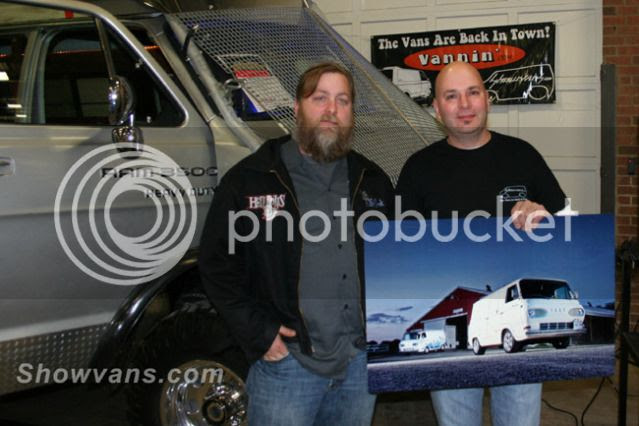 John and Ken with a metal print of California Special.

I was hoping that wemight see John back up here for Vanfest, but he'll be going on the Hot Rod Power Tour which will open up the opportunity for more vanners to meet him, see the Boogie Van and maybe get some pictures taken of their vans. This weekend he's at Motorama in Buffalo. 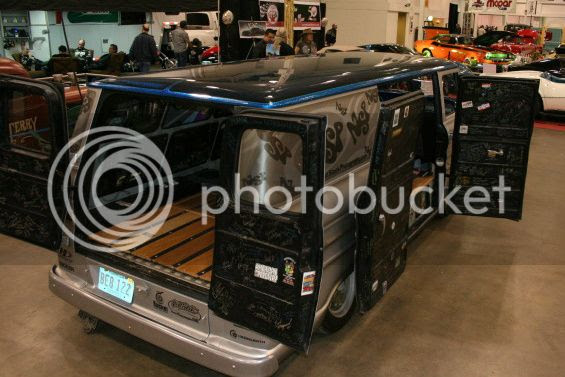 Posted by Showvans at 4:50 AM No comments:

Made another trip to the big show, in these parts anyways. Every year I go it gets more interesting, as I get to meet more people that I've met only online previously. One of the highlights was meeting Randy Pelc after 10+ years of chit chatting online. Randy built Heavy Metal, Metalstorm and Showtime and others, we've seen all three of the vans mentioned at the Nationals in the past 5 years and they all still look great up to 30 years after they were built. Dave Jarvis had his 9 second drag van there in a great spot pretty much smack dab in the middle of the main floor. His 100" flat screen  had videos going all day of his feats on the track. The Pass Time episode with him on it will air March 28th at 7:00 pm. 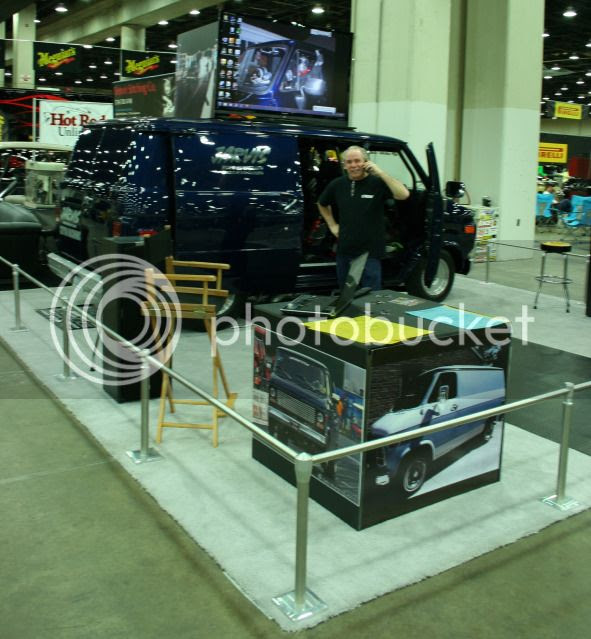 John Jackson was also there all the way from Texas with the Boogie Van. This vintage Corvair is without a doubt the most traveled custom van there is these days. It's John's mobile photo studio and daily driver. Check out John's amazing photography here: Notstockphotography.com
We took this shot in front of the Boogie Van for our mutual friend Coby who runs: CHURCH Magazine and owns Vango. We have Ken who was the captain of the Vango Retrieval team at the CofC in California, John, Jess (daughter of Gary owner of Alpine Express) and your's truly in our Vango and CHURCH shirts. 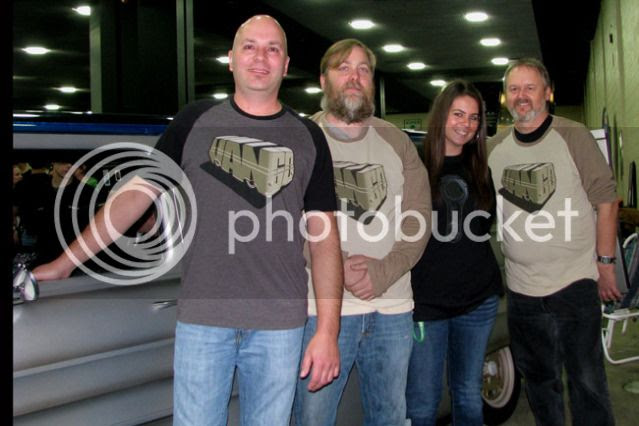 There were a couple of other vans in the shows and an equal number of early van pickups as well. Coop was there as well in the panel jam and a good bunch of us went to Greektown together for supper on the Saturday night.
Here's another shot of the Boogie Van. I promise to get better ones at Megaspeed as John will there as well. 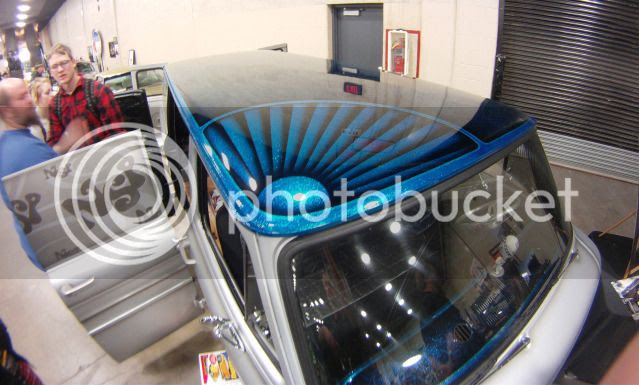 Went back early Sunday and snapped a good bunch of shots before the crowds came including this one of the Webbs' collection. The car on the right the So-Cal Streamliner is on the cover of the next Rodder's Journal, the ultimate hot rod magazine that John also has a couple of shots in. 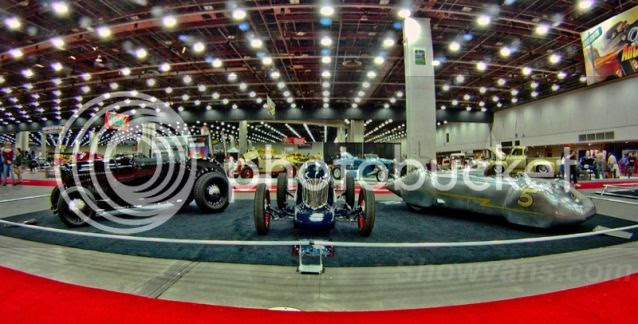 Then I hightailed out of there to get to Windsor for 1:00 to hang out with Ivan. I'll post that story next time.
Posted by Showvans at 3:21 PM No comments: