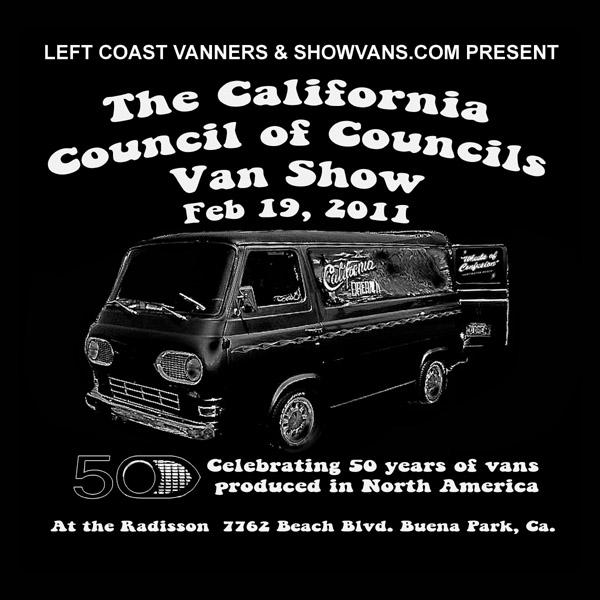 The custom van world will be descending on Southern California Feb 18-20 and many before for the annual Council of Councils van convention. This event is hosted by a different group in a different city on an annual basis. The Left Coast Vanners are no strangers to hosting this event and always do a great job. I'm happy to be able to help out a bit with this event by donating funds from the 2011 calendar towards the actual event as well as sponsoring the van show that will be held on Saturday Feb 19th. The California van scene is red hot right now with new clubs forming whose members were not even born when the van craze swept through. One of these clubs the Van Creeps had a recent show in Costa Mesa Ca. with 40 vans. Hot rodders have also taken to vans and have created some amazing game changing vans that we have seen at the 2010 Sema and will be seeing at the upcoming Grand National Roadster Show.
The van show is open free to the entrants, you don't need a full blown show van to enter bring your custom van down to the show park it and hang out. All the van owners who do show up with their vans will be given a dash plaque, a goodie bag,  be eligible for door prizes as well as awards. This event will also be free admission to the public. We're inviting Truckin', Dice, Street Trucks, Hot Rod, Church and other magazines to the event and the response is already looking very good. Speaking of magazines we keep seeing a rendering of an Econoline popping up, first in Hot Rod and more recently in Street Trucks. Howard managed to see that van last week in his travels at Midwest Images. It's still under construction but the plan is to have it done by the summer. He had a good talk with Mike the owner/builder of the van and there's a good chance we'll see it at a van event or two down the line.

The CofC van show will start at approximately 1:00 pm after the CofC meetings. A number of vanners will be  attending the Donut Derelict Breakfast in Huntington Beach early Saturday morning (5:30 am to 9:00 am). This will be kind of tribute to the late Rick Finn one of the originators of that event who invited us there personally the last time we were in Anaheim. Rick came out on the Friday to our show, showed his kool 53 F100 panel and hung out with us all afternoon. Unfortunately he passed away suddenly later on that year.

for more info on the actual CofC check here: http://www.2011cofc.exofire.net/
Posted by Showvans at 4:58 AM No comments: