Council of Councils this weekend in St Petersburg Florida

Each year hundreds of vanners attend the annual custom van convention called the Council of Councils (CofC). There are meetings to discuss custom vanning with elected members of the various councils as well as an open meeting where anyone can participate. It's also at this event that the decision is made on who will be hosting the following year's National Truck-In. The National Truck-In is in it's 40th year in 2012 and will be held in Elkhorn Wisconsin July 11-15.  A fairly new addition to the CofC is the van show. Last year we took advantage of being in California to have a full blown van show after the Saturday meetings. This show was sponsored by Showvans.com and attracted some of the top vans in the land including Vango and Octopus's Garden, vans that had just been in the GNRS. Octopus's Garden had also been in the 2010 SEMA show. We managed to get a few magazines there including Hot Rod, Truckin' and Drive Magazine. 2011 went on to be a very good year for coverage of vans in magazines, mainly of Vango. It's appearance at GNRS was huge, Coby took home the Chip Foose design award which pretty sealed the deal that it would gain acceptance by the very critical car crowd. It will be tough to beat 2011, we're not doing the CofC on the doorstep of all these magazines but we do have a new guy at Hot Rod interested in vans. Dennis Pittsenbarger just bought himself a classic Chevy van and is wondering what to do with it. He has written two blogs about it and his motivation to tackle a van :   http://blogs.hotrod.com/hrml-motivation-and-’74-g10-shorty-19867.html#comment-38807   I'll be sending him a vanner care package and invites to the next Slow Ride headin up the coast from Malibu as well as Dirty Donny's art show called Vantastic Voyage opening Feb 25th in Santa Monica.
So the future is looking bright once again. To make sure of that Johnny O has followed through with the idea to make show cards to promote vanning. The idea is not new however this is the first time someone has followed through to this extent. Somewhere in the neighborhood of 10,000 of these cards have been made. This was another project I was able to donate money to thanks to the 2012 calendar proceeds. Here's what they look like :

The show is in the middle. These cards will be handed out at the big indoor shows like Motorama, Autorama and Megaspeed.  Plenty more going on, will mention that next time.
Posted by Showvans at 8:25 PM 1 comment: 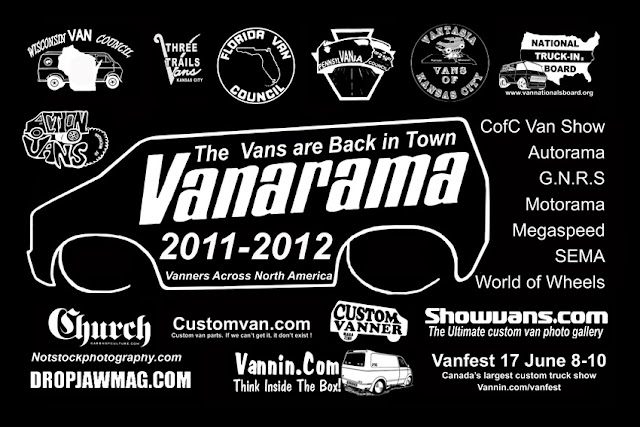 Custom vans are hitting the road once again to go to these indoor shows across North America.
Last year was a huge year for vans at these indoor shows with Coby's Vango stealing the show at the prestigious GNRS and taking home the Foose Design Award. Ron's Octopus's Garden was also in GNRS last year as well as SEMA in 2010. John Jackson's Boogie Van was everywhere in the past 2 years including SEMA (2001 and 2011), Detroit, Houston and countless outdoor shows. In honor of this we'll be making banners for all those entering their vans in these shows this year and I'll send some to Coby, Ron and give John his at Autorama. I'll get all the details together of these shows and post them on Showvans.com.
Posted by Showvans at 10:57 AM No comments:

If I were 3000 miles closer I'd be going on the Slow Ride for sure:

Coverage of the first Slow Ride is here : Slow Ride coverage on Showvans.com

Posted by Showvans at 5:04 AM No comments: