Tearing the site down and rebuilding it from scratch. Instead of blowing money on hosting I approached Astro over at Vannin.com and asked if we could have Showvans over on the vannin.com server again. We had it there originally but it grew  too fast at a time when bandwith was charged at a major premium.

It's a bunch of work to have the site but it is a tremendous showcase for custom vans at a time where we have the opportunity to shine with a bunch of big events in 2010 and even more so in 2011 with the 2011 CofC in California.  It's also at a time where our media connections are ata n all time high with the magazines both national and regional.  Glenn from Drop Jaw is planning on being at Vanfest and will be at the Nationals. Last year we managed to get web exclusive coverage on Truckinweb.com for both of those events. I'll be submitting coverage again this year and hope to do even better things with them next year on their own turf and at the 2011 Nationals.

I wish I could show the pictures of the 3 vans I am following that are currently being built and or totally rebuilt. 2 will be finished this summer, one hopefully next. These 3 vans are incredible and will show everyone that custom vans are extremely cool and worth a look. Also been told we'll have another newly built van making it's debut at Vanfest.

Although my main interest is in vans I also have a very strong interest in all cars and trucks.  It expands my horizons and opens me up to different ideas and helps expose people who would not usually be interested in vans to take a look at the other things I do. For the Detroit Autorama I collaborated with Myrideisme.com and helped them achieve their highest single day hit count with exclusive coverage of the Great 8 Ridler contenders. This little adventure pushed my photo abilities to the max and I'm happy to say that these were the best indoor pictures I've ever taken.  Last week the Gumball3000 Rally roared through town and I did another story for them on this event. 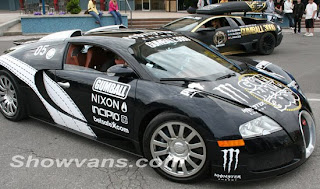 I mentioned to Randy that I really think this $1.5 million Bugatti Veyron looks like Heavy Metal, :).

So plenty going on and it seems more crazy ideas floating through my head than ever.

Posted by Showvans at 5:23 AM No comments: