The future is looking bright again. It's not even December and 90% of the 2009 Vannin' calendars are delivered, yahoo !
Finally snagged Showvans.com It has been years since I have been waiting for the price to drop to a reasonable level. So I will be working on getting that up and running in the next while.
Latest vanning project is to get 5 vans into the 2009 Detroit Autorama. I think the time is right to be able to do this. We have 5 of the top vans lined up for this. They have a few things in common. All have appeared in nationals magazines be on the cover, in features or in event coverage and all have won best of designations at the National Truck-In.
In the past few weeks I have managed to see two very popular vans going back to the 70's and the late 80's and nineties. Future Shock was built for BF Goodrich in 1976. The build was featured in Hot Rod magazine. It was sold a few times over the years and came very close to meeting an untimely end at the crushers. It will begin it's restoration this winter. Another top show van from the late 80's and early 90's Lion's Den almost met a similar fate. Fortunately it was rescued by some well meaning vanners and is in very capable hands for that restoration to begin. Both vans are being restored in Ontario Canada so you can expect some regular updates here and on Showvans.com
Posted by Showvans at 8:30 AM 1 comment: 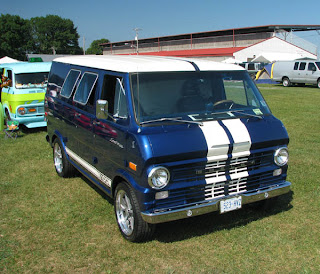 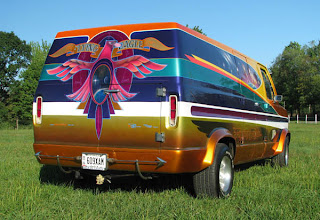 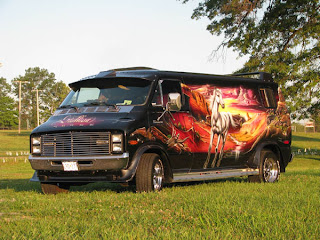 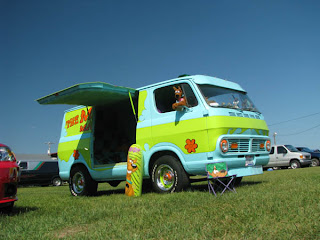 It takes a vanner to a Scooby Doo van right and this is among the finest I have seen.
Posted by Showvans at 2:58 PM No comments:

Honda ran the first Respect the van ads a couple of years back. It looks like they are are ready for a new one as we were contacted once again for info by the film company doing it as we were for the original. While we see vans appearing in a number of television ads from Honda to Stride gum : http://ca.youtube.com/user/StrideChewingGum
For some bizarre reason we still cannot get the magazines to run regular coverage of van events or custom vans. That is not for the lack of trying either. However we do have our own homegrown magazine that appears about twice a year : http://www.vaninmag.com/ Leadfoot is putting together issue 5 will a likely publish date in time for Christmas.
The National Truck-In was another big success with close to 500 vans from the 4 corners of the U.S. The hosts MASVA said it was going to be like an old time van run and they kept their promise with events like burnouts and a vankhana. Unfortunately I was not able to attend but Superbeast and Brad were both there to supply many pictures for the Showtrux.com coverage. Below is one of the highlight pictures of the burnout competition with the winner of the best of show award Janine and her husband Monte who won Best of the Best award doing a tandem burnout.

Vanning season is far from over and we'll be seeing plenty more coverage of the events coming up on Showtrux.com
Posted by Showvans at 12:13 PM No comments:

The "Nationals" the largest custom van event of the year with around 500 custom vans is happening as I write this and I am not there, :(. So I thought I'd start this blog and help get vanning on the map a wee bit more. We've been flying beneath the radar for many years now since the 70's vanning fad went away.  But each and every year there is a bit of a buzz among the thousands of vanners still active when companies like Honda, Verizon, Bluenotes and Alltel have all used custom vans in their ads.
The following pictures and video were taken in 2008 at van events in New York and Ontario Canada of vans from Vermont, Pennsylvania and Canada.

Vanning is alive and well in 2008, we're trying to spread the word. The national truck magazines
are very hard to convince that we are once again worthy of coverage. 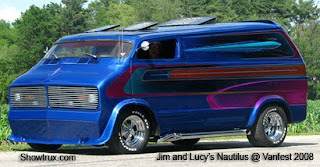 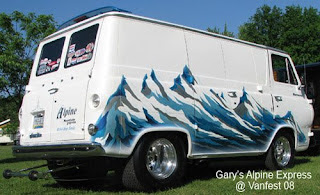 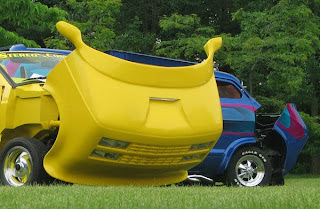 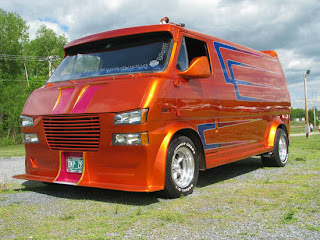