Detroit, Vanfest, Nationals and beyond

Detroit was a great time once again. In the end we managed to get 3 vanner vans in Autorama. It was very disappointing not having all 5 vans there especially Coop's Flying Eagle II as he was there anyway for the pinstriper's jam.  Before the event I mentioned that I would be going to Autorama on the myrideisme.com forum.  Craig got in touch with me about taking pictures for them, the end result was helping that website achieve their biggest day ever with exclusive Great 8 shots. At the time only Street Rodder Magazine had anything on the net from Autorama. A bunch of my Detroit pictures are headed to Drop Jaw Magazine for their website. 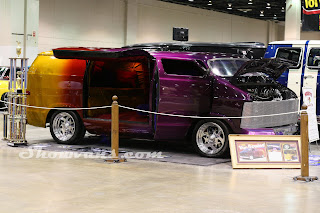 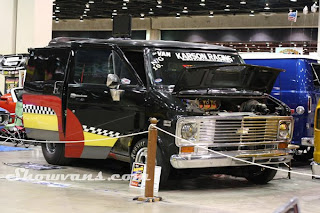 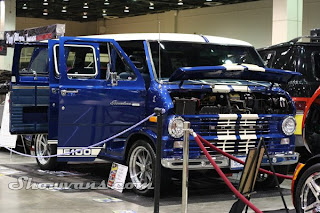 
2010 will be another great year in vanning. My travels will be limited unfortunately, not sure if I will make any van events before Vanfest in June.  Vanfest 15 is going to be Kevin's last at the helm. So if ever I have been motivated to do something special it will be for this one. Have some ideas in mind.
The Nationals will kind of be in my backyard, 6 hours away. I'm doing the website for this event and will be fairly involved with the Vannin.com Auction from there and likely take a couple of pictures for Truckin'. Not likely to see them at this one.
Onward to 2011 and the Council of Councils in Buena Park California. This will be one heck of an opportunity to showcase vans in the mecca of car/truck culture. I've already been scheming on this one since I heard of the bid back in early 2009. Thanks to a bit of help from my friends, we also managed to convince everyone at this year's CofC in Wisconsin to do the van show on the Saturday afternoon of the event. This opens the doors very wide to get the non vanners and the media more involved in the show.  Plenty more info on this will be coming.

Also in the process of moving Showvans.com back over to Vannin.com so it could be a bit wonky for a while.