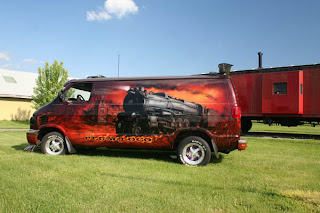 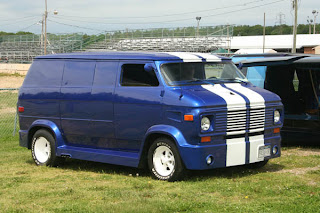 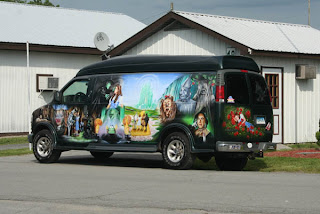 These vans will all likely be going to the 2009 Nationals and be back at the Greenwich grounds next July for the 2010 National Truck-In.
Posted by Showvans at 7:24 AM 4 comments: 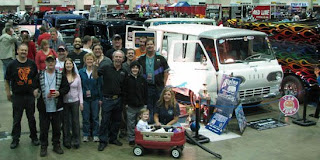 Detroit was a blast. Arrived Thursday just in time to see the 5 vanner owned vans setting up. It was a great relief to see them all there safe and sound. The vans were very well received at what is one of the largest and most prestigious indoor custom car/truck shows there is. We had visitors in from all over to support the vanners as well and thanks to Deb and Gills we all went out Saturday night to a neat restaurant in Greektown. Here is a video of the highlight pictures:

Around the time this was all going on Truckin' suddenly had a renewed interst in custom vans. So we will likely see them at the 2009 National Truck-In in Pennsylvania and they have promised to run th e5 features that were shot almost 5 years ago in Michigan on Woody's Smokin Chop, Alpine Express, Californiacation, Sweet Emotion and Battlestar.
We had our Vanfest meeting yesterday and things are looking great for that event. We will be adding a cruise into St Thomas on Friday evening which will surely be a big hit.
Posted by Showvans at 7:07 AM No comments: