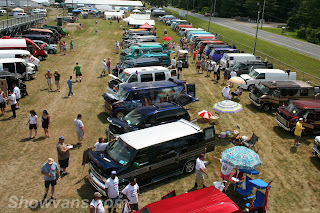 The van show Friday from 40 feet above


The 38th National Truck-In was another great one. 589 vans and panels through the gates is quite a feat in this day and age.  I arrived on Wednesday just in time for the Nats Board members meeting. This is the group that oversees this annual event. Being part of the support team for the Board I was involved in this event going back to Sept 2008. There is so much behind the scenes planning that goes into making this 4 day event special. VANNY did a great job this year.
I'll let the pictures tell part of the story, let the video tell some of the rest and hopefully we'll see the end of the story in Truckin' Magazine. Bob Ryder called me on the Tuesday of the Nats to see if I was still up to do the coverage. Getting this in Truckin' would be golden. Many many hours were spent taking pictures from every conceivable angle and every photo op was taken from 40 feet in the air to being one of only tow people allowed on the burnout field.
On Saturday during the awards I was surprised with two awards. Astro and I were presented with awards from Todd and Mary who have done some amazing promotion of vanning in New England thanking us for what we have done. The second award was presented by Howard on behalf of Gary owner of Alpine Express as a Vanner Appreciation. This is something very dear to my heart and finally opens the door to me getting this rolling in a big way with no sense that I'm doing it for myself. My feeling and some of my good friends is that vanners should be recognized for their efforts while they are with us and not only when they are being eulogized. One of the arguments is that every vanner is a vanner of the year ... however there are many who have been at this non stop for over 30 years and been involved in keeping vanning going and interesting for everyone every one of those years. There are many who have put their lives on hold, their reputations on the line doing great things for vanning. I was thrilled to get the awards but totally surprised and not at all prepared to thank those who have been supporting what I do for so many years. I'll try to make amends for that and will do a proper thank you down the line. 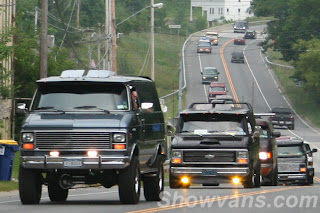 The Cruise into Greenwich, 105 vans strong ! 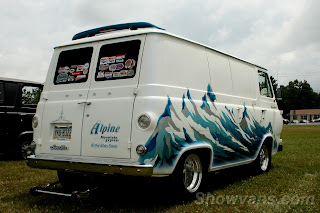 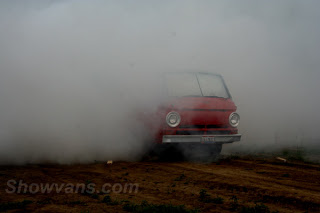 Homebrew "Up in Smoke" during burnout contest

Onward and upward I'll post where we're headed from here shortly. Good stuff coming.
Posted by Showvans at 4:41 AM No comments: