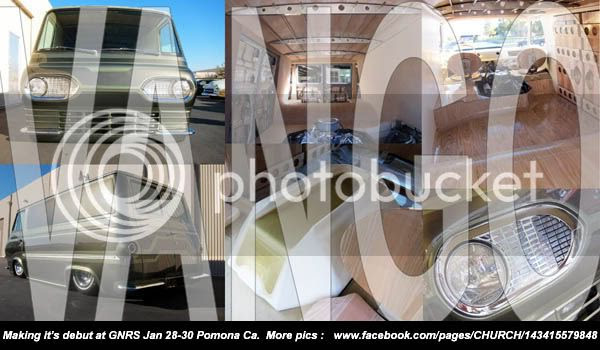 There has been a tremendous buzz on the street from the World of Wheels in Atlanta Ga. and now on the show floor of the Grand National Roadster Show in Pomona Ca. it's all about a van that has been a few years in the making called VANGO. That buzz is also on Facebook and many internet forums from customs vans as you would expect as well as a 200 post and growing thread on the H.A.M.B:  VANGO thread on the H.A.M.B

Coby has raised the bar, broken the mold and changed the game with this 1963 Econoline. We are hoping to see him at the Council of Councils van show Feb 19th in Buena Park Ca. But everyone already wants a piece of this van and we'll be seeing more of it at the indoor shows and in the magazines coming out in 2011.

Wish Coby all the best with his masterpiece and that he gets all his wishes for it. If you are in our around Pomona this weekend do get out to GNRS and be one of the first to see VANGO.
Posted by Showvans at 9:35 AM 1 comment:

The final details of the Council of Councils are being put into place now. The Left Coast Vanners have been hard at it getting this all done with a minimal staff. Hats off to them for the enthusiasm and effort they put into these events for the benefit of all vanners.
The van show on Feb 19th is also falling into place. The invites have been sent out and we're hoping to have a great turnout. Vans will now be let in to the show area as of 10:00 am. There's limited space but we will work on that.

Onwards into 2011, Vans on the Run the hosts of the 39th National Truck-In in Old Washington Ohio are also busy getting their event ready. Coop let me in on some details that I need to keep secret but will be rather mind blowing, vanners keep raising the bar with their van events which is great to see.
I had an idea for the Nats, bounced it off of Coop and he said run with it. Vanners and racing have gone hand in hand since day one. Some of the early van runs in Ohio were held at the National Trails dragstrip. Yesterday I contacted them to see if anything was going on the week of the Nationals, sure enough there is Grudge Match Wednesday. So now we're in the process of getting some of our high performance vans lined up for this. If we can get some of the notable drag vans on board then consider that event on the Nats calendar. Van drags were very common in the early days, it will be great if this works out.

Some of my friends from the Midwest and Arizona have been putting lettered Showvans.com stickers on their vans and trailers for a while now. It's something I wanted to do for a while myself so along with Attitudecheckonline.com I had some decals and t-shirts made up. I'll have the details on them on the website this weekend. I'll bring a few shirts to the CofC with me a good bunch of decals. 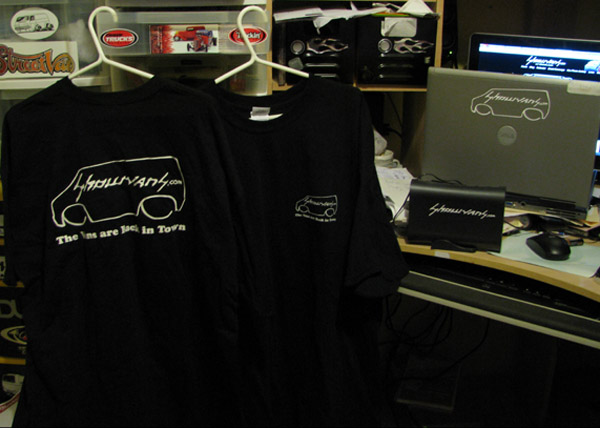 The indoor shows start this month, we'll be seeing two amazing Econos to help celebrate the 50th Anniversary.  Alpine Express in the Pittsburgh World of Wheels show Jan 21-23 and the grand premier of VANGO in the Grand National Roadster Show Jan 28-31. This van is a game changer and one of the most talked about vans out of the realm of vanning ever. Coby a well known artist, Church magazine guy and hot rod builder has created a masterpiece. Octopus' Garden will also be in GNRS, this van was first shown at the 2010 SEMA and will be featured in upcoming issues of Truckin'. Both VANGO and Octopus' Garden are suppose to be coming to the CofC van show.
Posted by Showvans at 4:47 AM No comments: